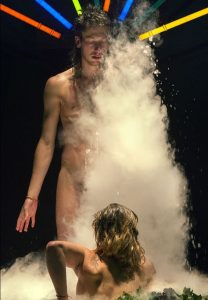 In a masterful, choreographic frenzy, the artist duo Vincent Riebeek and Florentina Holzinger reveal rarely realised connections between obscenity, beauty, provocation, affection, disgust and intimacy. Vienna-born Holzinger and Dutch choreographer Vincent Riebeek first began collaborating while still students at the School for New Dance Development in Amsterdam. Their graduation piece, entitled Kein Applaus für Scheiße ( No Applaus for Shit), quickly them the reputation of most provocative new choreographers in Europe. With Spirit (2012) and Wellness (2013), their oeuvre grew into a radical, unprecedented trilogy, which can now be seen for the first time at Künstlerhaus Mousonturm on three consecutive evenings.

Kein Applaus für Scheiße is a massive flirt with the limitations of what is possible on stage. For this, Holzinger and Riebeek invoke the ghosts of 1970’s body and performance art. With unconditional devotion, they apply themselves to almost every aspect of the cliché-laden canon of body art to personally update and radicalise it with the best of what dance, song and acrobatics has to offer. In the process, the two performers never lose sight of themselves nor the title of their piece as an (almost) literally meant mission.

For Spirit, their first international co-production, the seductive duo ransacked Eastern philosophy, pop culture, tarot, psychomagic and the Cirque du Soleil to brew a golden cordial out of their conquests and flood the stage with it. Driven by profound conviction, Holzinger and Riebeek create a spectacular ode to faith – in theatre, in each other, in their own performance and in their audience.

“The only art that is worth making, is an art that heals”. For the brilliant finale of their trilogy Holzinger and Riebeek have organised expert reinforcements: five Wellness guerilleros approach their audience challenging the healing effects of art and dance. Once again, a collective, shame-free extreme expansion of space, time and bodies is require to frighten off esoteric-schmaltzy misconceptions of the ideal body or holistic wellbeing.

Physical action and a bit of English