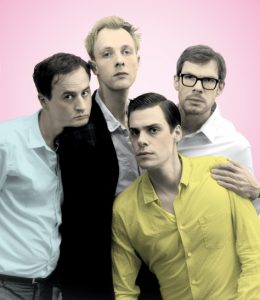 Kreisy is from Vienna and actually an antibody in this coffee house of a city and the frozen traditionalism of the surrounding country. But for this exact same reason, it is precisely the right place to be for these four musicians represent “awkwardness, resistance even when the enemy isn’t clear and visible”, as De:Bug once wrote. The band is empirically at its best when playing live. Kreisky concerts are religious celebrations of noise, volume and entertainment that have managed to bowl over pretty much everyone so far. Now, they are finally coming to us with songs such as Blick auf die Alpen – slender, jangling and energetic, vicious and world-embracing.