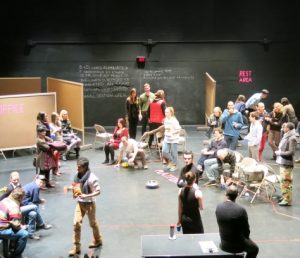 On Trial Together (Episode Offenbach)

In their extraordinary performance, performance maker Saša Asentić and theorist and dramaturge Ana Vujanović strike at the heart of current social and political debates. Where does democracy take place? Which concrete spaces do we have for political action? On Trial Together is a hybrid between choreography, social game and happening that raises the questions of what is the theatre and what is choreography.
After episodes in Belgrade, Novi Sad, New York and Athens, Vujanović and Asentić now invite us to submerge ourselves in various scenarios into fictive events in and around Offenbach that are inspired by reality or the possibility thereof – a general strike, a camp for immigrants from the future, the European Central Bank going bankrupt or other similar plots. How will people react, once no one represents them on stage? The audience is part of the performance and through its movements and actions shapes a social choreography in which a shared future is negotiated simultaneously on both a fictive and very real level.

In German and English