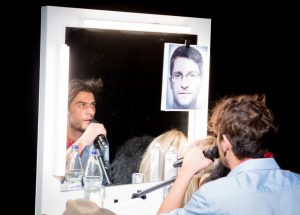 Edward Snowden had talent and quickly made a career for himself in the CIA. He lived the American dream. Yet his conscience soon got in the young computer specialist’s way: in 2013, he leaked 1.7 million files, mainly concerning classified surveillance and intelligence programmes used by the USA and its allies. Ever since, Prism, Tempora and the Angela Merkel’s cellphone are subjects of public debate – and Edward Snowden is on the run. In Europe, he symbolizes transparency and emancipation; in the States, he is considered a traitor. Is the Internet proving to be a surveillance machine, which we can incidentally also use to book flights and order books? Dreams and desires are private; safeguarding privacy is a fundamental principle of modern democracies versus totalitarian states, which police their citizens.