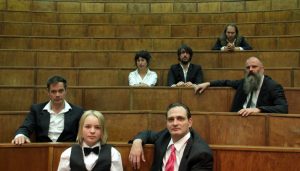 “When I’m dead and someone comes around offering resurrection: I’ll punch him in the face.” (Arno Schmidt)

For their fundamental dispute about the history of European religion and the church, norton.commander.productions. have assembled the sharpest representatives of the German performance scene. The second part of their three-year long project X GEBOTE asks whether God exists. What begins as a philosophical lecture soon gets out of hand. Miniatures of failure alternate with strategic calculations of the advantages that attending a Catholic school has for one’s later work and career. Is “God” that greater authority, which provides a stable value system and whose absence results in moral chaos and ethic relativism? Or is it a self-deceptive illusion machine, a bank with unlimited credit, as long as you believe in it? To prove their hypotheses, the performers resort to every means available. Whether as military apostle of prosperity, prophetic fertility dancer or sober natural scientist – in the battle of questions, the only thing that counts is when personal opinion wins out.