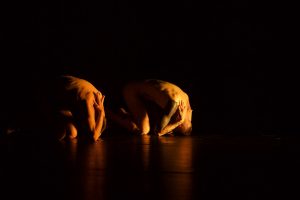 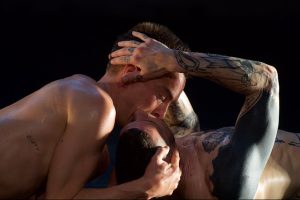 The initiation to this political ritual, an innocent smile that mutates into a horrific grin. Two bodies, hypersensitive, travel through shaking, trembling and twitching. They are vulnerable and simultaneously explosive. The Bessie-award winning piece “Glory” by Berlin-based choreographer Jeremy Wade continues to be of rousing intensity now in it’s fourth adaptation. Physically unconditional, a naked duet in which Wade and dancer Sindri Runudde live through the brutality that norms exert on the body, to the entraining conceptions of space that Brendan Dougherty’s powerful music evokes. Two bodies offer themselves to a cyclic litany of polar opposites, embodying agony, ecstasy, arrogance and groveling that develops into a shimmering empowerment of non-belonging, in which the forces of shame, remorse, humiliation, intoxication, and submission are integrated via surrender. Grace is the balance of abandon and command this dance is a glorious queer dispossession ritual. A naked pilgrimage of oblivion into union.

Jeremy Wade is a performer with an extensive practice of curating and teaching. He graduated from the School for New Dance Development, Amsterdam, in 2000 and received a Bessie Award for his performance Glory, at Dance Theater Workshop, New York City, in 2006. Since then he works in close collaboration with HAU Hebbel am Ufer in Berlin as well as Gessnerallee, Zurich. In his recent work, Wade explores death, zombie subjectivity, strange modes of being and feminist strategies of world making to undermine the social codes that define and oppress bodies. He is the initiator of “The Future Clinic for Critical Care”, an intersectional platform exploring the messy politics of care through performance, social practice and sociocultural animation.

Glory, being presented at Mousonturm in June was the first work that I made as a young choreographer in New York City in parts starting in 2003 and reworking it in the last decades. The brutal, naked duet is an in-depth exploration of the periphery of social code. It was a dance of non-belonging, a dispossession of the normative smooth fluid codes that make up day to day emotional and behavioral patterns of interaction. The static object and notions of fixed subjectivity are on trial. The ontological questions mapped out in a nauseous and deeply physical investigation of morphing and crashing through the polar opposites of shame, remorse, abjection, ecstasy and eventually surrender.
Coming of age as a young artist in NYC at the end of the 90ties was not easy. It was the post-plague years and so many dances had been erased. I began my study of dance through the filter of postmodernism; at the School for New Development, Amsterdam, lucky to have Katie Duck and Gonnie Heggen as bold queer feminist influences. However, back in NYC Downtown Dance centered on the hyper-functionality of a body. Somatic practices were in vogue in order to create a fluid, released, pendulum-like swinging. And, in the end, it was very much about this middle-class white virtuosity with ease. Pleasant to look at, felt good to do, but it was framed as holistic and the worst part was its claim to efficiency and productivity. The dances that were coming out of me were nervous and uneasy. I committed to an ecstatic grotesque, an emotional, behavioral and physical continuum, a refutation of essentialism, I called this practice Articulating Disorientation.
I was working my ass off by bartending, go-go dancing, painting apartments, turning tricks and barely surviving The Big (Badass) Apple. I worked at the original world-famous The Cock on Avenue A, which back in the day was the sleaziest most amazing gay bar in the universe. Here, you got syphilis if you sat on the couch. I was doing a lot of drugs, having a lot of sex in dark rooms, dressing up wildly, crowd surfing naked at the Cock’s legendary Saturday night party called Foxy. Eventually I threw my own parties at The Cock and a Saturday Night House Party with Honey Dijon I called Audio Nasty. My 20’s could be capsulated as a sustained sense of eyes wide awe, a slow-moving nervous breakdown, and prodigious hard-on. I crashed big time, the Twin Towers fell and the shock doctrine of gentrification, a new world order, took effect overnight. I used to call the genre that my fellow choreographers and I were in, not post-modern, but post- fucked. We were post-mortem.
Glory took on loads of untenable experiences in my early 20’s and became their repository. I was fascinated with the politics of ecstasy and surrender. I took notes when I was crashing and meticulously mapped the dialectical behavioral gestures of my mania and groveling. I knew by heart those moments when “She was feeling it!” on the dance floor in clubs, eyes rolled in ecstasy, all limbs akimbo. I saw this unfolding body in the ecstatic dances of Pentecostal Christian churches, as members of congregations opened up their bodies to receive “holy ghost power”, shaking them towards a monstrous undoing. There were many unifying principles to the behavior I observed in all of these states that made their way into the math of Glory: affect as a force, the child as the height of trance, but most importantly this feeling that surrender was a site of undifferentiated vibrations or what I like to call “everything is new”.

Glory is a queer divine. Glory, for me, took place in denigrated spaces, unholy, profane at the wee hours of the morning. Aids Activist, curator and writer, Douglas Crimp, famously wrote: “It is our promiscuity that will save us.” I am a whore. I open up my holes to you, I also do it on stage. I get paid and there is consent, contracts. My promiscuity is a queer, utopian, extroverted and highly inclusive sociality. It is a plea for being different together, a sensual form of interdependence. Our bodies are electric and when charged with perversity we can at times experience a shimmering alterity.
Can performance rewrite the shitty stories we are imbedded in? Can we rewrite the myths that separate us? Can we do this critical rewriting not through destruction but through support. Maybe the result of affective solidarity, this psychic interrelatedness, is this feeling that “it’s going to be okay.” Or the dangerous laughter that erupts in a theater when we use humor in protest. Being able to laugh at the shitty stories we are embedded in is powerful shit. Being able to mourn the shitty stories that we are embedded in is also powerful. Being able to mourn, in a room full of people, is what theater does best. The political efficacy of art could be its capacity to dream otherwise about less violent futures. The political efficacy of art could be that it remains a vestige for making new myths to get us through the complicated now. 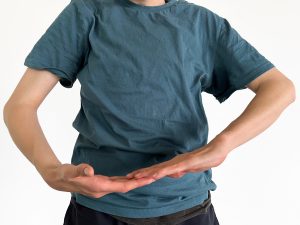 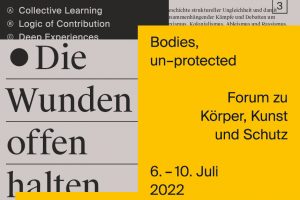